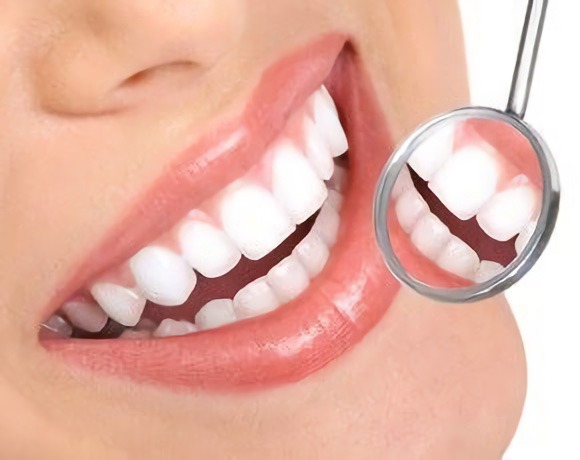 is an integral part of our philosophy for your dental care. Dr. Rae focuses on prevention first. While having aesthetically beautiful teeth is desirable, maintaining good oral hygiene is one of the most important things you can do for your teeth and gums! Healthy teeth not only enable you to look and feel good, they make it possible to eat and speak properly.

Many patients overlook the health of their mouth, but good oral health means so much more than just clean teeth, it is important to your overall well-being. Promoting health through preventative dentistry and educating our patients about good oral hygiene is the heart of what we do for our patients every day.

Our Hygienist, Karen and Michelle, provide gentle, compassionate care with thorough examinations and professional cleanings. This allows them to identify problem areas and treat periodontal disease.

The health of your gums is as important as the health of your teeth. Gum Disease begins when plaque (a depository layer consisting of bacteria) builds up between your teeth and gums. The initial signs may begin with bleeding of the gums when brushing, as well as redness, swelling or pain in the gums.

This stage is known as gingivitis, and is easily reversible. We can remove the plaque, tartar, and toxins causing this inflammation through using the ultrasonic cleaning and hand instruments (scaling). This would be followed by oral hygiene instructions and planning a specific home care regime tailored to your requirements. Using a solid combination of professional cleanings, and home care with regular follow-up visits, will lead to the health of the gums to stay optimal.
If left untreated, gingivitis can progress to Periodontitis. Periodontitis is a more serious condition which involves the destruction of the gums supporting jaw bones. The teeth may eventually become loose, or may have to be extracted (in very advanced stages). Depending on the severity of Periodontal disease, the treatment may range from deep cleanings (scaling, and root planning) with a combination of some medications. Deep cleaning is usually done one quadrant of the mouth at a time. All the tartar deposits, plaque, and toxins are removed from above and below the gum line (scaling), and the rough spots on the roots surfaces are made smooth (root planning). Some antibiotics may also be recommended. Very strict home care, and regular follow-ups will help you to stabilize this condition, and maintain the health of your gums.
Advanced stages may require advanced treatments like surgery and the need for a referral to a Periodontist (gum specialist).
Research studies have shown that there is a strong association between Periodontal disease and other chronic conditions such as Diabetes, Heart disease, Pregnancy complications and Respiratory disease. Thus, halting the progression of periodontal disease, and maintaining excellent standards of oral hygiene will not only reduce the risk of gum disease, and bone loss, but will also reduces the chances of developing other serious conditions.

Gum Disease is a Risk Factor for Heart Disease

Subscribe to our channel! Good oral health leads to good overall health. Take gum disease for example. It’s linked to such serious conditions as heart disease. But you can protect yourself against… 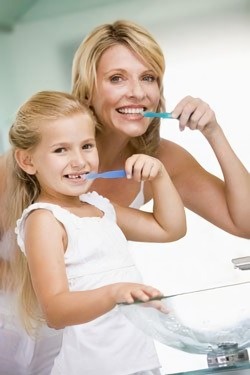 It takes 24 hours for the plaque that is not removed from your teeth to turn into tartar! Daily home cleaning helps control plaque and tartar formation but those hard to reach areas will always need special attention.

We will determine the interval of your recall visit according to the severity of the disease. It can be 3 or 6 months and can be combined with your dental check-up visit.

How to brush your teeth? Learn in 4 simple steps!

Brushing your teeth properly is very important and unfortunately many dental problems are the result of wrong or insufficient dental hygiene and because people don’t know how to brush teeth. The right. 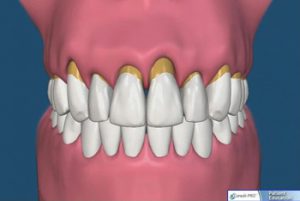 More than 75% of American adults have some form of gum disease, but according to a major survey, only 60% have any significant knowledge about the problem. Gum inflammation and ulcers are common, and not all people with these problems develop periodontal disease. Still, about 30% of people are genetically susceptible to periodontal disease. Other factors also put individuals at higher risk.

Children, and Adolescents. Gingivitis, in varying degrees, is nearly a universal finding in children, and adolescents. In rare cases, children and adolescents are subject to destructive forms of Gingivitis. Researchers have also observed organisms found in Periodontal disease to be in young children without any signs of gum problems. Healthy children, however, do not generally harbor two primary Periodontal bacteria, P. gingivalis, and T. denticola. The disease is also uncommon in teenagers.

About three-quarters of periodontal office visits are made by women, even though women tend to take better care of their teeth than men. Female hormones affect the gums, and women are particularly susceptible to periodontal problems. Hormone-influenced gingivitis appears in some adolescents, in some pregnant women, and is occasionally a side effect of birth control medication.

Before Menstruation. Gingivitis may flare up in some women a few days before they menstruate, when progesterone levels are high. Gum inflammation may also occur during ovulation. Progesterone dilates blood vessels causing inflammation, and blocks the repair of collagen, the structural protein that supports the gums.

During Pregnancy. Hormonal changes during pregnancy can aggravate existing gingivitis, which typically worsens around the second month and reaches a peak in the eighth month. Pregnancy does not cause gum disease, and simple preventive oral hygiene can help maintain healthy gums. Any pregnancy-related gingivitis usually resolves within a few months of delivery. Because periodontal disease can increase the risk for low-weight infants and cause other complications, it is important for pregnant women to see a dentist.

Oral Contraceptives. Some studies report that oral contraceptives containing the synthetic progesterone desogestrel (but not dienogest, another common progesterone) increase the risk for periodontal disease.

Menopause. Estrogen deficiency after menopause reduces bone mineral density, which can lead to bone loss. Bone loss is associated with both periodontal disease and osteoporosis. Bone loss in the alveolar bone (which holds the tooth in place) may be a major predictor of tooth loss in post menopausal women. Periodontal disease is the main cause of alveolar bone loss. During menopause, some women may also develop a rare condition called menopausal gingivostomatitis, in which the gums are dry, shiny, and bleed easily. Women may also experience abnormal tastes and sensations (such as salty, spicy, acidic, and burning) in the mouth.

Intimacy. Intimate partners and spouses of people with periodontal disease may also be at risk. Researchers have found that the bacteria P. gingivalis may be contagious after exposure to an infected person over a long period of time. There is no risk from short exposure, such as after a fast kiss or when sharing an eating utensil.

Smoking is the single major preventable risk factor for periodontal disease. The habit can cause bone loss and gum recession even in the absence of periodontal disease. A number of studies indicate that smoking and nicotine increase inflammation by reducing oxygen in gum tissue and triggering an over-production of immune factors called cytokines (specifically ones called interleukins). In excess, cytokines are harmful to cells and tissue.

Furthermore, when nicotine combines with oral bacteria, such as P. gingivalis, the effect produces even greater levels of cytokines and eventually leads to periodontal connective tissue breakdown. Smokers may be more than 10 times more likely than nonsmokers to harbor the bacteria that cause periodontal disease and are also more likely to have advanced periodontal disease.

The risk of periodontal disease increases with the number of cigarettes smoked per day. Smoking cigars and pipes carries the same risks as smoking cigarettes. Exposure to secondhand smoke may also be associated with an increased risk for developing periodontal disease, according to one study. Fortunately, when smokers quit, their periodontal health gradually recovers to a state comparable to that of nonsmokers.

Diabetes. Much evidence exists on the link between type 1 and type 2 diabetes to Periodontal disease. Diabetes causes changes in blood vessels, and high levels of specific inflammatory chemicals such as Interleukins, that significantly increase the chances of periodontal disease. High levels of Triglycerides (which are common in type 2 diabetes) also appear to impair Periodontal health. Obesity, common in people with type 2 diabetes, may also predispose a person to gum disease. Controlling both type 1 and 2 diabetes may help reduce periodontal problems. For children with diabetes, good oral hygiene should begin at a young age.

The American Dental Association (ADA) recommends that patients who are prescribed, or are to receive Bisphosphonate drugs should get a thorough dental exam before beginning drug therapy, or as soon as possible after beginning therapy. The ADA also recommends that patients who take oral Bisphosphonate drugs should discuss with their dentists any potential risks from dental procedures (such as extractions, and implants) that involve the jawbone. In any case, be sure to inform your dentist if you are taking a Bisphosphonate drug. Your dentist, or oral surgeon may need to take special precautions when performing dental surgery to prevent complications.

Herpes-Related Gingivitis. Herpes virus is a common cause of Gingivitis in children and has become increasingly common in adults. Typically Gingivitis starts out with a purplish color and “boggy” sensation in the gums. Multiple blisters may form across the mucus membranes in the mouth and gums, followed by ulcers. These usually resolve in 7 – 14 days.

HIV-Associated Gingivitis. HIV-associated gingivitis has been reported in 15 – 50% of patients with HIV or AIDS. HIV-positive individuals harbor larger numbers of periodontal bacteria (candida albicans, P. gingivalis, black-pigmented anaerobic rods, and (A. actinomycetemcomitans) than people without HIV. Severe pain is characteristic, along with odor, spontaneous bleeding, ulcers, and swollen, bright red gums. The inflammation never recedes, but halitosis and acute episodes can be managed by conventional cleaning treatments. Its severest form, known as necrotizing stomatitis, can be diagnostic for AIDS. In addition to bleeding, the gums in the front of the mouth are a yellowish-gray color, and bone thrusts out.

Autoimmune Diseases. Autoimmune conditions (Crohn’s disease, multiple Sclerosis, Rheumatoid arthritis, Lupus Erythematosus, and CREST syndrome) have been associated with a higher instance of Periodontal disease. Some research suggests that Periodontal disease may even play some role in these diseases.

Other Diseases. People with tuberculosis, syphilis, Wegener’s granulomatosis, amyloidosis, and many genetic disorders are also at higher risk for Periodontitis. Vitamin C Deficiencies.

Vitamin C helps the body repair, and maintain connective tissue. Vitamin C’s antioxidant properties are important in the presence of tissue-destroying oxidants in Periodontal disease. Research indicates that vitamin C deficiency contributes to Periodontal disease. Vitamin C levels are especially depleted in smokers. Eating citrus fruits high in Vitamin C (such as grapefruit) may be helpful for patients with Periodontitis.

Ethnic, Socioeconomic, and Geographic Factors
Dental disease is most likely to affect the poor. Children, the elderly, and ethnic minorities suffer the worst dental care. In the United States, the lack of access to dental insurance is a contributing factor.
Drug-Induced Gingivitis
Gingival overgrowth can be a side effect of nearly 20 different drugs, most commonly Phenytoin (Dilantin), Cyclosporine (Sandimmune), and a short-acting form of the calcium channel blocker Nifedipine (Procardia).
Other Causes of Gum Inflammation

Several other conditions can also cause gum inflammation, and some have been associated with Periodontal disease. These conditions include: